I recently re-read Corey Robin's contribution to a forum on Economics After Neoliberalism that proposed a project to "uninstall" Hayek:

Hayek translated moral and political problems into an economic idiom. What we need now, I would argue, is a way to uninstall or reverse that translation. ... Hayek persuaded generations of elites that it is only the individual in the market who can engage in such a process. In a modern society, the combination of informational challenges, on the one hand, and the intractability of moral conflict, on the other, was seen as too great to make decisions about economic life through public deliberation.

I think this is a good frame in which to read A Random Physicist — the main thesis is that making assumptions about how individuals in the market operate or deriving conclusions from them is fraught with problems, that the insights we think we gleaned do not depend on economic agents, and that we should plead ignorance about what individuals think. It builds to the deconstruction of Hayek's price mechanism (summarized in my Evonomics article).

While I agree that Hayek's firmware has been installed in the minds of most economists, I don't think his insights were the most corrupting — or even have that much influence at all today in the real world of everyday people. For that, we have to turn to Hayek popularizer Milton Friedman.

Ironically, the place where (as Keynes would put it) defunct economist Friedman still seems to hold the most sway is on the left/center left. Even the MMT [1] so popular among democratic socialists is best seen as a find-and-replace on our modern status quo with money switched for debt (as the driver of economic activity) and interest rates switched for the salaries of guaranteed jobs (as the mechanism for controlling inflation). On the right, no one really cares about economic theory unless it can be used as a post hoc rationalization. We can see evidence of that in how quickly they've abandoned Friedman.

A Workers' History is about uninstalling Friedman. It points out that the narrative we've been told about the post-war economic history of the United States is empirically unsupported, and in fact often gets causality backwards with effects preceding purported causes. It turns out social changes are a better explanatory framework for the post-war economy — not Friedman's monetarism. And since monetary and fiscal policy [2] do not seem to have much of an effect on macroeconomic metrics like GDP, we should make decisions about our lives based on public deliberation of moral choices. The only way to do that in a world with no single moral authority is through robust and egalitarian democracy [3].

I once heard that a good definition of the inherently slippery term "neoliberal" was the codification of ameliorating social problems as improving economic efficiency — we provide unemployment insurance not because it's morally right but because it's Keynesian stimulus that improves growth; we try to mitigate inequality not because it's corrupting of society but because it's a drag on economic growth [4]. A Workers' History is a direct argument against that view, and argues that policies that attempt to treat symptoms (e.g. inequality) but do not address their underlying social causes (e.g. racism) will create bigger problems (e.g. the housing crisis).

A Random Physicist — uninstalling Hayek and the individual economic agent.

[1] But Jason, how do you really feel about MMT?

[2] Fiscal policies do seem to have tiny effects (mostly due to the fact that G is part of Y = C + I + G − NX), and are at their best when they directly employ people. However, nothing like the WPA has been attempted in a long time.

[3] That's why some of the conclusions of A Workers' History are about addressing the poor decisions of a democratic minority (particularly the "rural white working class") — to be best solved with democratic reforms.

[4] Even lefty heterodox econ seems to take inequality being a cause rather than an effect as dogma.
Posted by Jason Smith at 2:13 PM No comments: 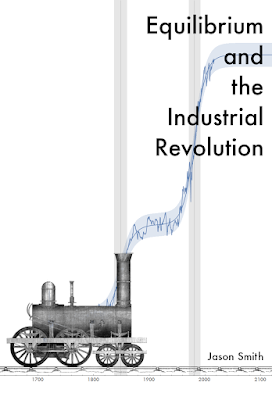 I've written a bit about the Industrial Revolution and long term growth on the blog:

But coming across this data set made me fear for the future — what if growth as we know it is over for an extended period? That's going to be my driving question for my next book. The implications will be hard to understand if only because our current institutions rely on economic growth in order to function. 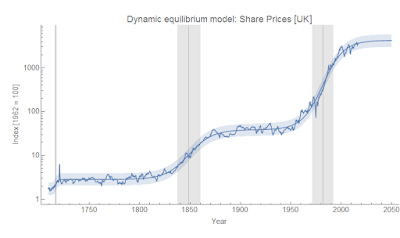 No idea when it'll come out — it might be a couple of years.

Posted by Jason Smith at 3:16 PM No comments: