If I open a new piece of state space (or close one off), then it's likely agents "near" that piece of state space are the ones that are explore it (or leave for nearby open areas). This makes the process of evolution "localized". In a biological system, species in different ecosystems evolve in ways largely independent of species in other ecosystems, which may eventually result in some kind of conflict or catastrophe. More importantly, evolution happens from the current set of species (exploring parts of state space near existing species), creating strong path dependence.

In economic systems, e.g. firms will explore state space near existing firms, which may or may not find the best solutions.

This issue with "localized" optimization turns into a good argument in favor of government intervention in markets to both alleviate issues with path dependence (e.g. by providing workers with help if their industry needs to be reduced in favor of some other more socially optimal industry) and providing new seeds to grow in less explored areas of state space (e.g. funding science and innovation). I missed the opportunity to make this point in my book, but it is a good one.

In future posts, I will discuss unlearningecon's other points.
Posted by Jason Smith at 4:00 PM No comments:

Cracked the top 20 in one of the best seller categories!

Thanks to everyone who has bought a copy! The book cracked the top 20 in Two-hour business and money short reads: 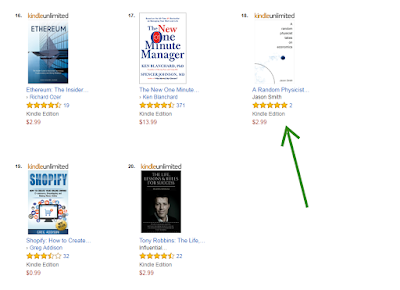 It's also #29 in Kindle economics books:


Thank you again to everyone for reading!
Posted by Jason Smith at 1:00 PM No comments:

Presentation on Becker (1962) and Information Equilibrium

This is a draft presentation for a conference I was invited to, but wasn't able to attend. It gives a more technical introduction to the ideas in my book and goes a little further:

A great review from economist Dr. Cameron Murray (co-author of Game of Mates) — the intro:

Jason Smith, a random physicist, has a new book out where he takes aim at some of the core foundations of microeconomics. I encourage every economist out there to open their mind, read it, and genuinely consider the implications of this new approach.

This is probably the best review I could have ever hoped for!

And now Amazon seems to recognize the paperback and Kindle e-book are the same book, so they appear together on the same page (click the image):

Update: There are also some good comments on Cameron's post that I've tried to respond to ...

Despite spending a long time proofreading and even having the book edited by others, there still are some errors and typos. This post will serve as a repository for these errors and will be updated as they are discovered (feel free to add errors you've found in comments).

"For example, in a 2011 paper by Rochelle Edge and Refet Gurkaynak found that formally complex DSGE models are very poor at forecasting."

Extraneous "by" or "in" in the Kindle e-book. In the paperback edition, the "by" was deleted.

The list switches from a list of variables to a variable combination in the last item. It's confusing. My preferred re-write is:

This is an example of a macroeconomy with four equilibria.

This should be an em dash.

My Evonomics article and my book 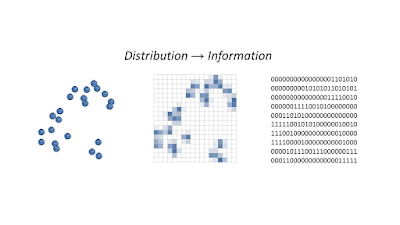 I had an article on Evonomics back in May of this year:

This article is a slightly more technical (and political) version of the tenth chapter, The economic problem, in my book (the chapters are actually pretty short so it just seems like a lot). The two pieces are completely different versions of explaining almost the exact same subject. The Evonomics article goes more into discussion of Generative Adversarial Networks (GANs) and the possible connection to information equilibrium. There are also some pretty pictures!
Posted by Jason Smith at 5:00 AM No comments:

Due to popular demand for a dead-tree version, I've done the reformatting, cover re-design, and pagination checking (as well as correcting one typo) for a paperback edition of A random physicist takes on economics:

Click through the image to order on Amazon US. Also available on Amazon UK (and a few other nations as available via Amazon KDP).
Posted by Jason Smith at 12:00 PM 1 comment:

I think I should credit Noah Smith for the phrase "scope conditions" I use in my book. My use of the phrase has been a bit of a tongue-in-cheek jibe ever since Noah ascribed a phrase I had never used to physicists:

I have not seen economists spend much time thinking about domains of applicability (what physicists usually call "scope conditions"). But it's an important topic to think about.

A discussion of scope conditions referencing two of Noah's posts is here.

Being a much more widely read blogger with a much bigger platform at Bloomberg View, he has since made "scope conditions" or "theory scope" more ubiquitous than the more technical physics terms "limit", "scale", or "region of validity".

But I've been attempting to get economists to see and understand this idea for awhile now. The earliest documented evidence is from a comment on Scott Sumner's blog from 2011 (using the physics term "limit"):

My opinion here, but I think finding a theory that reduces to both a monetarist theory and a Keynesian theory in various limits or under specific constraints may be a key to understanding macroeconomics and more focus should be in that direction (unless it has already been done! I haven’t been able to find anything). Both theories appear to save the phenomena in particular regimes so the “correct” macroeconomic theory should reduce to each in particular limits.

Not that I have any issue with "scope conditions" — it's a really good phrase for this concept. It's just that I'd never used the phrase as a physicist. I do have a personal story about the concept however.

During my thesis defense (aka the final exam at UW, where you present the research in your thesis to your committee and then spend an hour or longer responding to the toughest questions about it your committee can think of), I was asked where the model of quark physics I was using was valid (its region of validity). Normally this would be an easy question because the particular assumptions usually yield direct "scope conditions". You assume the speed of light is large and so the model is valid for velocities small compared to the speed of light: v << c.

However, my model lacked a specific property of the underlying theory (you could call it the "microfoundations") quantum chromodynamics (QCD) called confinement — you never see an individual quark, they always come in "colorless" combinations of three red-green-blue or two red-antired.

The problem is that confinement has not been proven analytically from QCD yet, only shown via some experimental and computational methods. So it is much more difficult to translate an assumption that confinement doesn't matter into a specific scope condition. So you can probably guess I struggled with the question in my thesis defense.

I've thought about that question off and on over the past 12 years (almost to the day in August of 2005). My best answer now is that the scope is the same scope as the deep inelastic scattering model: Q² >> 1 GeV² (probing the nucleus at less than 1 fm length scale). Asymptotic freedom (confinement disappears at high energy) of QCD means that confinement doesn't have an effect at high energy except for the input scale for DGLAP evolution (the equations used to change the energy scale of quark and gluon distributions). However, until confinement is understood analytically, this particular scope condition is going to be more hand waving than science.

So in the end I completely agree with Noah: scope conditions are important to think about.
Posted by Jason Smith at 11:00 AM No comments:

A random physicist takes on economics: Out now!

My Kindle e-book is now available on Amazon.com for free as part of Kindle Unlimited, or for 2.99 USD (and for other amounts in other countries). Click through the image to buy!

Update: Consider this the first open thread in comments for book discussion and initial thoughts ...
Posted by Jason Smith at 7:02 PM 8 comments:

A Random Physicist Takes on Economics is now formatted, and being published by Amazon KDP. It'll be live in the next 72 hours according to the estimate ...

In the meantime, here's the original first draft of the book's description blurb (since I can't seem to access the final version that'll be on the Amazon page):

A Random Physicist Takes on Economics is a critique of economic methodology from an outsider's perspective. Author Jason Smith leverages random agents and information theory to argue against ubiquitous economic constructs such as so-called "rational" expectations, prediction markets, and utility maximizing agents using examples consisting of nothing more complicated than Dungeons and Dragons dice sets and pints of blueberries. In the end, he calls for economists to present more uncertainty and plead greater ignorance when it comes to questions of politics and policy.

Posted by Jason Smith at 4:00 PM No comments:

The purpose of this blog

The main purpose of this blog is to function as a place for discussion of and questions about my e-book A random physicist takes on economics. I will link to and discuss reviews, as well as occasionally provide supplementary material, material that was removed in editing, as well as more technical versions (including equations) of the arguments made in the book.

It's also a means of keeping book-related blogging and commercial endeavors separate from my more speculative research and academic endeavors on the information transfer framework available at my blog Information Transfer Economics.

I can be contacted via DM at Twitter @infotranecon with questions or other requests as well as through comments on this blog or email:

Thank you for reading!
Posted by Jason Smith at 3:00 PM No comments:

After a long delay, I have finally completed a final draft. All that is left is to set the Amazon e-book formatting and submit. The chapter headings are as they were when the first full draft was completed, but the book is now longer (over 26,000 words) and better written ‒ with many thanks to those that agreed to read it!

A random physicist takes on economics
Posted by Jason Smith at 2:00 PM 1 comment: